For the BBQ Sauce: Combine the Worcestershire sauce, soy sauce, lemon juice, tomato puree and dark brown sugar in a small saucepot and on medium heat stir to dissolve the sugar. Bring to a boil and simmer for 5 minutes and remove from the heat. In a large saucepot add the cream and bring to a boil. Simmer until the cream is thick enough to coat the back of a spoon. Stir in some of the BBQ base until you like the flavor. Bring the mixture back to a boil and simmer again until it coats the back of a spoon.

For the Maytag Blue Cheese Slaw: In a food processor, combine the egg, lemon juice, mustard and vinegar. Process for 30 seconds and slowly add the peanut oil. Season with salt and pepper and add the crumbled blue cheese and process for 5 more seconds. Push the mayonnaise through a fine mesh strainer. Toss the cabbage with enough mayonnaise to coat. Add in 1/2 of the green onion, 1/4 cup of the Maytag blue cheese and season with salt and pepper and toss well.

For the BBQ Shrimp: Season the shrimp with salt and pepper. In a hot sautThank's For Reading rosemary hugo's bbq shrimp with blue cheese slaw Easy Recipes 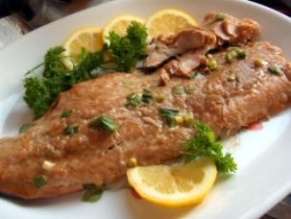