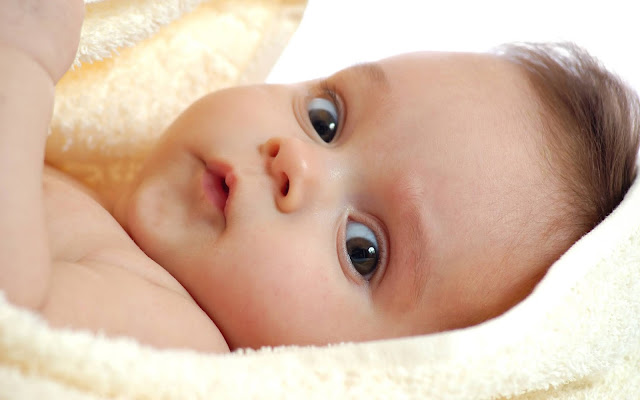 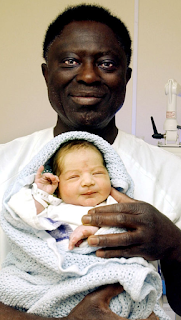 When Rachel Manias' husband first noticed the facial disparities in their baby, they had never heard of positional plagiocephaly. Their son, Dane, had been taken to the neonatal intensive care unit shortly after birth due to panic attacks. He was later diagnosed with reflux, the cause of his attacks. While in the NICU, the Maniacs were told to lay him on his right side because he would be more comfortable that way.
"My husband noticed the facial asymmetry at about six weeks," says Manias, an Ohio mother of two. "I thought he just looked that way from being squished at birth and it would be fine in a few more weeks. But when he was diagnosed with plagiocephaly, we went through his birth pictures and noticed that he didn't look that way when he was born."
Positional plagiocephaly is a condition in which the back or one side of the back of an infant's head is flattened due to the infant spending a lot of time lying on his or her back. Normal growth of the skull in that area is restricted because of the persistent, chronic pressure of lying on that area. The skull bone of an infant is very malleable and easily deformed.

After their son was diagnosed, Manias and her husband began physical therapy for torticollis, a neck condition that also contributed to his plagiocephaly. They repositioned him while sleeping to keep him off that part of his head.
"He did improve, but we weren't satisfied because of the facial and ear asymmetry," says Manias. "We decided to get a DOC (dynamic orthotic cranioplasty) band. We knew the best results are achieved when children are banded in the early months." 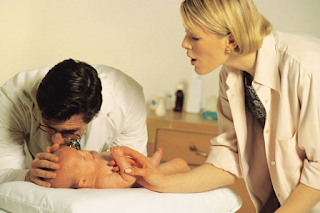 Plagiocephaly is rarely serious and, as the Maniases found out, easily remedied, even if the child does have to wear a band, a therapeutic helmet-like device designed to reshape the child's head over a period of time.
The complications of this condition are generally cosmetic, according to Dr. Lewis First, Chief of Pediatrics at Vermont Children's Hospital at Fletcher Allen Health Care and Professor of Pediatrics, University of Vermont College of Medicine.
"There are rare cases of facial problems resulting from severe asymmetry, including problems with vision, chewing and eating, but these almost never occur, especially if the problem is recognized in the first few months of life," says Dr. First.
Dr. First feels it's important to note that the condition does not affect brain growth or cause developmental delay. "The simplest treatment is repositioning of the baby's head by simple maneuvers such as alternating the direction the infant is placed in the crib each night or moving the orientation of the crib so that the baby is not always looking out using the same head position each day," he says. "It is best to give the baby lots of ‘tummy time’ when [the baby is] awake to strengthen Baby's muscles in the arms, legs and neck, as well as to reduce the external pressure on the back of the head."
Dr. First suggests having an X-ray taken if the problem persists during the ages of 4 to 6 months to make sure the bones of the skull are coming together properly. If the skull bones look normal, a custom molding helmet may be recommended to help redirect the skull’s growth.

Plagiocephaly is on the rise, according to recent studies. In 1992, the American Academy of Pediatrics initiated a "Back to Sleep" campaign to fight the number of SIDS cases. The campaign has been incredibly successful, with some estimates putting the decrease in SIDS at 50 percent a year. However, there has been a six-fold increase in the incidence of positional plagiocephaly. Most pediatricians feel that, given the excellent prognosis of plagiocephaly, the benefit of preventing SIDS by putting babies on their backs to sleep far outweighs the risk of a temporary flat head.
But plagiocephaly isn't always due to sleeping positions or torticollis. Debbie Joneses' daughter Abigail was born with it.
"Abby's plagio began in utero as many babies do," says Jones. "We noticed her head was stuck in one position for the last several weeks of my pregnancy on our weekly ultrasounds. We are very fortunate to have a great pediatrician who was alert and noticed this so young."
The Jones attempted repositioning but found it to be too difficult with their daughter. They used the side sleeper method, but within 30 minutes Abby would have already rolled back over to her flat side.
"We often compare plagiocephaly heads to a deflated ball," says Jones. "Once they are flat, the head just instinctively rolls back to the flat side."
The Jones’ pediatrician recommended that her daughter wear a band, but she and her husband were skeptical and decided to try further repositioning. When they began getting comments from others about her flat head they finally decided to give it a try.
"If adults were rude enough to make such cruel comments to us today, imagine what it would be like for Abby in school with kids picking on her ‘flat head’ day in and day out," says Jones.
The first band the Joneses tried on Abby was not successful, so they tried a band from Cranial Technologies, which she wore from age 11 1/2 months to 15 1/2 months. The second band was more successful with approximately 50 to 60 percent correction of her plagiocephaly.
"It's so very important to get fast and early diagnosis," says Jones. "I feel too many pediatricians are not educated nearly enough regarding plagio, considering the number of cases today. I would like to see first-time parents educated on plagio at childbirth classes or while in their hospital stay after the baby is born. This could help prevent countless plagio cases."

Because of the increase in the number of plagiocephaly cases, more studies are being done on causes and treatment of the condition. According to Dr. Andrew Reisner, a Pediatric Neurosurgeon for Children's Healthcare of Atlanta, the Craniofacial Team and the Orthotics and Prosthetic Department at Children's Healthcare of Atlanta at Scottish Rite are working on a number of studies.
"These studies include two exciting projects," says Dr. Reisner. "First, there is an ongoing study assessing how quickly children with mild to moderate plagiocephaly improve spontaneously with repositioning only. Second, there is a study assessing the value of a new device [that] assesses and measures the individual shape and deformity of the child's head using a laser scanner." The information from the laser scanner can be entered into a computer, which will generate a three-dimensional image of the patient's skull from which a helmet or band can be made, according to Dr. Reisner.
"This technique is very sensitive, accurate and allows the treatment to be highly individualized for that particular patient," he says. The best part about this particular method of obtaining a mold of the patient's head is that it is painless and well tolerated by the children.
Both Manias and Jones say neither of their children minded wearing the band, and both families are very pleased with the results.
"Dane actually missed the band when he graduated," says Manias. “We were thrilled with the progress he made. Banding him was the best decision we made as parents. We saw improvement within the first week of treatment, so we had high expectations. All those expectations were realized after three months in the DOC band."