Having a baby is all about making room: your body makes room for your uterus; your heart makes room for more love, and your family makes room for a new member. All of these changes seem to happen without thought. Too bad making room for the masses of baby gear isn't that easy.
"Whether you're in a three-bedroom house or a one-bedroom apartment, clutter happens," says Derek Groves, a designer at Guenther's in Milwaukee, Wis.
While few people can afford to buy bigger or add on, he says, they can learn to make the most of the space they have. To help your family find order and make room to enjoy Baby, try the following space-creating tips.

You don't have to devote an entire bedroom to such a tiny creature. In fact, your baby could care less whether or not she has her own room. That leaves you with two choices: Baby shares your bedroom or Baby shares a sibling's bedroom. Either way, you'll want to carve out a baby-sized portion of individual space. "Use folding screens covered in great fabrics or tall bookcases to separate the baby from the older child if a bedroom is shared," Groves suggests. "You could also use this technique in the master bedroom if the baby will sleep there."
By separating the room into sleeping areas, you open the door to creative decorating, says Groves. "While it's nice to work with the same color scheme, you can always upholster big brother's side of the screen with cowboys and Baby's side with Mother Goose. At first glance, no one will be the wiser."
Elizabeth Ferree of Yuma, Ariz. found that decorating a shared sleep space wasn't as hard as it seemed. "We put nails in the wall and hung up some stuffed animals around the crib," Ferree says. What could be seen as an unusual sleeping arrangement turned out to have some unforeseen benefits? "Very snug and comfy."

Parents spend a good portion of their time dressing and undressing Baby. No wonder a well made, sharply painted, and highly-priced changing table gets added to so many shower gift lists! The truth is, changing tables take up just as much space as a dresser, and they really aren't as crucial as they seem. "A changing table outgrows its purpose in 18 to 24 months, but a dresser with a changing pad on top can be utilized for years," says JoAnne Lenart-Weary of JoAnne Lenart-Weary Interiors in Waterford, Penn.
Michele Lightfoot of Manteno, Ill. shares this opinion. "Rather than have a changing table, I used a dresser that fit right in [my son's] wee little closet," Lightfoot says. Once she moved the table into the closet, she realized a whole new world of storage was within arm's reach. "I left the door on the closet and hung a shoe organizer on the inside. It had clear pockets, and I used it to hold lotions, socks, booties, etc. The closet shelf held extra diapers and wipes. He only had a few outfits that needed to be hung up, so I just put them in my closet." 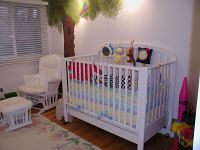 You might be amazed at how much space you never knew you had. Closets, storage rooms, pantries, and mudrooms can clean up quite nicely. "As most standard closets are 6 feet long, you have plenty of room to fit in a 54-inch crib and a small chest of drawers for storage," says Lenart-Weary. "Just remove the closet doors and the closet hardware and paint or paper the interior of the closet to complement the adjoining room." When you add a large tension rod to the doorframe, she says, you can use tab-top curtains for privacy.
Brette Sember of Clarence, N.Y. found that creating the perfect nursery space was little more than a juggling act. "I could not give up my office since at the time I was practicing law from there, Sember says. "The small storage room upstairs was being used as our [oldest] daughter's playroom. We emptied it out and made that the nursery. We then converted her large closet into the playroom." She soon realized that everything she had for Baby wouldn't fit into the storage-room-turned-nursery. So she opened her mind and found the space she needed in other areas of the house. "We put the rocking chair in the hallway outside the room, [and] all of the baby toys ended up in the living room."
If you stretch your imagination far enough, you might begin to see rooms in a whole new light. Many kitchens are large enough for a table, Groves says, so you might forget the dining room for a few years and change that space into a playroom.

If you don't have a closet to hold the changing table or a storage room large enough to double as a nursery, it's time to start eliminating. You'll be surprised by how little you and your baby need to be happy. "After the first child, I never set up the changing table with the other three," says Rachel Webb of Hurricane, Utah. "It is a waste of space, and if I stored anything under the changing table my baby would just crawl over and pull everything off! It is so much safer and more convenient to change the baby on the floor." Exersaucers, swings, highchairs, and bassinets can all be added to the nice-but-not-necessary list. If your shower already yielded a dump truck load of paraphernalia, enlist the help of a friend or two and have a yard sale. Lighten your load, make some cash, and don't worry about whether or not you're cheating your baby. From a baby's perspective, no amount of stuff will ever compare to the comfort of your arms.