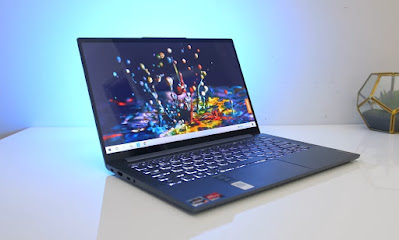 The Lenovo Slim 7 packs in AMD’s new 8 core Ryzen 7 4800U processor into a 14 inch machine,offering CPU power in a smaller form factor that was never previously possible.
The build quality feels great, it’s got a metal lid, interior, and bottom panel with a grey finish, corners are rounded, but the front edge can feel a little sharp if you brush up against it, it was fine during normal use though. Mine weighed about 1.4kg or 3.1lb, then with the 65 watt power brick and cables for charging it’s 1.7kg or 3.77lb. 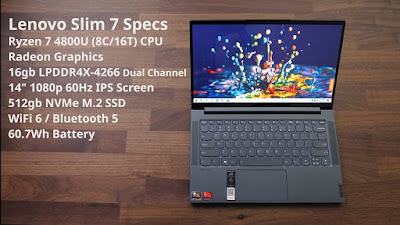 It’s less than 1.5cm thick, so on the smaller side and quite portable, and this smaller ,footprintresults in just 5mm thin screen bezels on the sides.
There’s something up with the display that we need to talk about. Lenovo lists it as a 14” 1080p IPS glossy screen with 300 nit brightness, however when
we look at the parts list, it seems that three different panels are being used, shout out to Code Husky for putting me onto this. 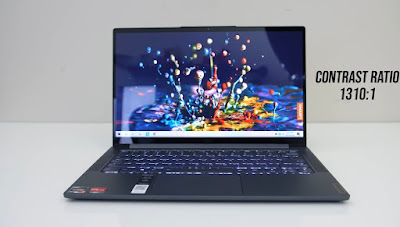 Now, I bring this up because I was seeing a maximum brightness of 257 nits with AMD’s Varibright off, but then others like Notebookcheck report a 400 nit brightness with the AUO panel.
I don’t currently see an option of picking different panels when ordering, so I’m not sure if it just varies by region or what.
Anyway back to the screen in my unit, it’s got 98% of sRGB, 68% of NTSC, 74% of AdobeRGB, and 73% of DCI-P3 coverage, so it’s still quite decent and has an excellent contrast ratio, just not quite as bright as what’s advertised.
Backlight bleed was very minor, I never noticed it when viewing darker content, but this will vary between laptops and panels. It can be opened up with one finger, and the screen goes the full 180 degrees back for sharing.

It also powers on automatically when you open the lid, a nice feature as chances are you want to use it when you do this, but you can disable it through software.
Screen flex was on the lower side thanks to the metal lid, keyboard flex wasn’t too bad either when going out of my way to push down hard, absolutely no issues with the build quality during normal everyday use.
The 720p camera is above the display in the center with IR for Windows Hello support,which I found to work quickly.
This is what the camera and microphone look and sound like, and this is what it sounds like if I’m typing on the keyboard. 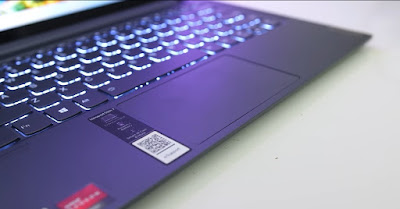 The keyboard has white backlighting which illuminates all keys and secondary key functions, and brightness can be adjusted between two levels or turned off with the function and space keys.
I preferred typing on it compared to the HP Envy x360 I’m currently testing, here’s how it sounds to give you an idea of what to expect.
There are front facing speakers on either side of the keyboard, there’s some bass and they were loud enough at max volume and clear enough too with just a little wrist rest vibration, and the latencymon results weren’t looking good. 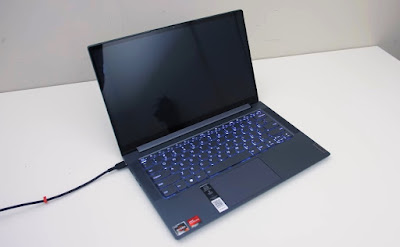 The precision touchpad clicks down anywhere and mostly worked well, but I noticed a sort of spring sound when pressing down in the middle, the left and right were unaffected,
but it just seems to be a different sound, it didn’t actually feel different to press. Fingerprints and dirt don’t show too easily on the matte grey finish, but as it’s smooth
it’s easy to clean with a microfiber cloth. On the left from the back there’s a USB Type-C port which is also the power input,
HDMI 2.0 output, another USB Type-C port, this one does power delivery and offers DisplayPort output, but can also be used to charge the machine too, followed by 3.5mm audio combo jack. 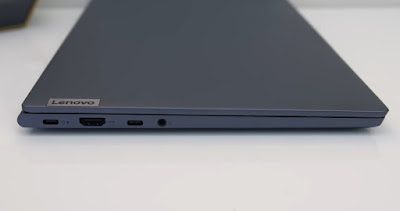 On the right there’s a MicroSD card slot, two USB 3.2 Gen1 Type-A ports, and the power button right at the back.
There’s nothing on the back, air is instead exhausted below the screen. The front has a little lip sticking out in the center so you can open the lid. There’s not much going on underneath, just air intake vents towards the back.
Getting inside was easy enough after removing 7 TR5 screws of the same length and prying all 4 sides.
Inside we’ve got the battery taking up most of the space down the bottom, then M.2 storage slot in the center. 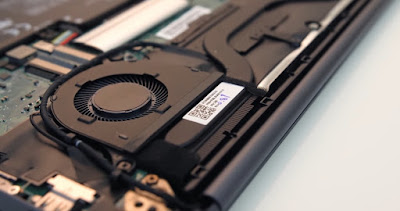 There’s an additional M.2 slot to the right of it which can be used to install a smaller 2242 size SSD, and the WiFi 6 card is hidden near the heatpipes under some tape.
Memory is soldered to the board unfortunately, so you’ll need to buy with future needs in mind.
The Slim 7 is powered by a 4-Cell 60.7Wh battery, and it broke the record in my YouTube playback battery life test, lasting for more than 12 hours and it beat the previous best result by more than an hour and a half, awesome stuff. 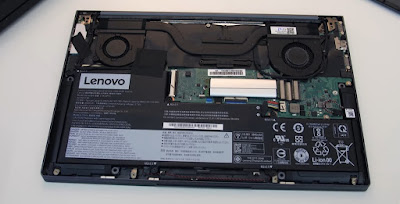 It comes with the Lenovo Vantage software which lets you manage the machine and apply updates.
There are three different power modes, battery saving, intelligent cooling, and extreme performance.
You can change the mode through software here, or by using the function plus Q shortcut on the keyboard. It was cool to the touch at idle in the lowest quiet mode.
With a CPU stress test running it’s only a little warm in the middle, then a bit higher in performance mode, but still it only felt warm to the touch, the wrist rest area was still cool, let’s have a listen to the fans.
It sounded silent at idle, was still on the quieter side with the stress test running, and then even in performance mode it’s not terribly loud in this worst case example.
Here are the temperatures with the same stress test being run in the two available modes, so it’s definitely getting quite hot in this worst case - at least internally, as
we just saw the surface temps were reasonable despite this. While running above 100 degrees Celsius it was sitting at 3.1GHz over all 8 cores, and this was while running at 26 watts on average, this is long term though, it would boost higher in shorter loads to reach higher speeds.
Here’s how the different modes translate into Cinebench performance, so basically the same for single core, then a boost in multicore with extreme performance enabled.
I tried using the Ryzen controller software to boost it further, but it made no change to the stock result.
When we look at how it stacks up against others, interestingly both the single and multicore score is higher than the 8 core Intel option in the Razer Blade 15 advanced, which is due to that machine having low power limits, most other Intel H series 8 core options are ahead though, but still this is impressive performance from a 14 inch machine. 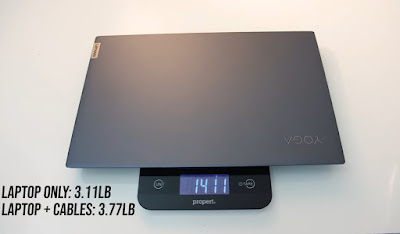 The ASUS Zephyrus G14 is also a 14 inch machine and does better, though it is thicker too. Although not a gaming laptop by any means, you can get away with some light 1080p gaming
with the Radeon graphics with lower settings, some heavier games would likely be possible too if you’re willing to drop the resolution down to say 720p, and it’s also got a FreeSync range of 40Hz to 60Hz.
I’ll test out more games for future comparisons with Intel’s new Xe graphics, so make sure you’re subscribed for that.
Adobe Premiere was estimating 3 hours or so in my usual export test, far longer than others I’ve tested, it seems that discrete graphics or otherwise Intel’s quicksync really helps
there, and this also resulted in a poor score in the Puget Systems benchmark. Video editing on AMD CPU only just doesn’t seem to go too well in premiere at the moment, but as you can see in the other results, as soon as there’s discrete graphics it’s doing much better.
I’ve used Crystal Disk Mark to test the storage, and the 512gb NVMe M.2 SSD was doing well, the MicroSD card slot was on the slower side though, but preferable to not having 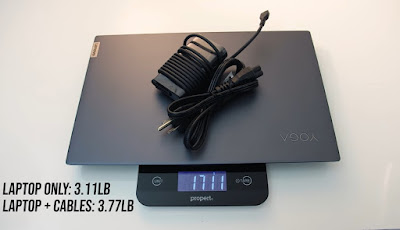 it, and it sits most of the way into the machine. For updated pricing check the links in the description, as prices will change over time.
At the time of recording, availability for the Slim 7 still seems a bit scarce, I wasn’t able to find it in stock in the US.
Here in Australia we’re looking at $2700 AUD, which is about $1800 USD minus our taxes, but stuff here costs more than the US so I’d expect it to be less than this.
Alright with all of that in mind let’s conclude by considering the good and the bad to help you decide if the Lenovo Yoga Slim 7 is worth considering.
All things considered, I think this is a great machine. Before Ryzen 4000 this level of processing power in a thinner 14 inch device like this was simply not possible.
The 4800U processor can run quite hot when you actually hit the CPU with heavy multicore load though, but to be fair it doesn’t feel hot to the touch and the fans don’t go crazy so I suppose that’s the trade off to get 8 cores in this chassis.
This is also in the max performance mode, so you can limit performance in the lower mode if you prefer cooler temps, but again this is when you’re actually smashing all
8 cores hard, it’s a worst case, and technically still within AMD’s spec. It’s impossible to say how other components nearby will deal with the heat long term.
The Radeon graphics allow you to perform some tasks like light gaming, but I’d be looking for something more powerful in the GPU department personally for tasks like video editing.
The raw power is there, but software suites like those from Adobe don’t seem to work too well with the Ryzen integrated graphics at the moment.
The all metal build quality was great, battery life was insane, the screen was decent though not as bright as I’d like, but as discussed it looks like that will vary based on the panel you get.
The keyboard and touchpad were good, weird springy sounding issue aside that could just by my unit, speakers were fair, and it just worked well.

My only complaints are pretty minor all things considered, the front edge was a little sharp if you brush up against it and the memory is soldered, though that seems pretty common at 14 inches and below when you’re this thin, and to be fair having two M.2 slots and user upgradeable WiFi is more than some other small machines offer.