Google has made a phone that I can recommend to almost anyone with almost no reservations. At four years old, the Pixel family has been around long enough that even if you're not a phone geek,you probably know a few things.
It's made by Google, it's got a world-class camera, and physically speaking, the color is the most interesting thing about it. The Pixel 5 doesn't change any of these things, but it does correct for the compromise that's always gone hand-in-hand with the brand.

Whether it's price or battery life or camera features or whatever the hell this was, there's always been something about the Pixel that's given me pause when friends ask if they should buy one.
The most significant of those some things on the Pixel 4 was battery life. So the Pixel 5 counters with the biggest battery the line has ever seen paired with a processor that for the first time on a top-shelf Pixel isn't the top-of-the-line Snapdragon.

And yes, I am listing that as an advantage for the same reason I did so in my reviews of the OnePlus Nord and the new Motorola Razr. Folks, unless you're pointing a slow motion camera at your phone to see if you can spot any lag, you will not notice a day-to-day difference.
The Pixel 5 delivers the same consistently smooth responsiveness as the Pixel 4, refreshed at the same adaptive 90 Hertz rate. And despite that power draw and that of the 5G radios, over five days of testing, I found it difficult to kill the Pixel 5 in less than a day. The only time I got close was when I kept the screen on for three hours as a virtual notepad on a recent podcast appearance.

And even then, I was still above 20% by the time I went to bed. Google also wasn't afraid to remove features that don't make a lot of sense right now like face unlock. It's really cool, but when everybody's masking up, it's not the best solution.
So the Pixel 5 ditches last year's face scanner, along with the deeply undercooked gesture controls and replaces it with a good old-fashioned fingerprint sensor back in its old spot on the rear cover, both faster and more useful than an underdisplay sensor because the notification shade is just a finger tickle away.

The glass back of the past couple of generations has been removed as well, replaced by a so-called bio-resin stretched across the phone's aluminum frame. Yes, that means this is a plastic Pixel but plastic is only a dirty word when it's improperly implemented.
This isn't the cheap chintz of a bodega burner phone nor the greasy unapologetic plastic of the iPhone 5c. Instead, it's a matte material with just the barest hint of soft touch texture: easy to hold, impossible to smudge, and just as transparent to inductive charging as glass. Yep, that means you can charge the phone with a regular qi pad. 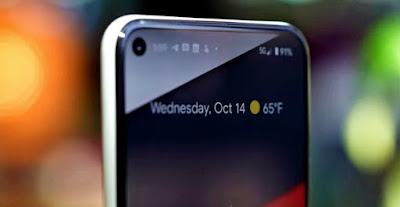 And if you flip it into reverse, it means your phone can charge your Pixel Buds too. Some omissions are invisible. Note the lack of an earpiece speaker in favor of one hidden beneath the Gorilla Glass 6, which sounds fine on phone calls but lends slightly less stereo effect in media playback. Others are unexpectedly disappointing.
I used to squeeze my Pixel 4 to reach the Google Assistant all the time, but Active Edge is gone now. And some sacrifices, you just have to take with a sigh and the nod, like anything that might lend any personality to this industrial design.

The only way to get one even remotely eye-catching is to order it in Sorta Sage. I saved the camera course correction for last because it's the most nuanced. On the surface, it seemed like a dream come true when I first saw the spec sheet. Google decided to ditch the telephoto camera for a wide angle? Sweet! It's about time.
Sadly though, a closer look at the optics reveals that kind of like the Sage colorway, this wide angle is only sorta with a field of view of just 107 degrees. Sure, it's wider than the primary camera, but compared with the over 120 degrees of most smartphones, and you'll definitely notice that you capture significantly less of the subject in the frame.

And Google compounds this downgrade by also shrinking the selfie camera to 84 degrees, down from 90 degrees on last year's Pixel, which itself was down from 97 degrees on the Pixel 3. Now you could just say, "Buy a selfie stick," which you know, fair, I have one. Obviously, they're useful. But I used to be able to say, "Oh, I have a Pixel. I don't need one."
And it's a shame to see Google surrender that little bit of selfie standout-ary. I asked Google for comment on this and it justified its decision for the back cameras by saying that 107 degree lens allows them to apply correction more consistently, which means if you have faces in your wide angle shot, they'll come out a little better. Okay, or you could just use the main camera, but I gotcha.
As for the front, well, this is a punch hole display. Google said it wanted to make as small a punch out as possible. And a wider angle selfie camera would have required a wider diameter porthole. Fortunately, the Pixel 5 does compensate for those drawbacks with this wizard magic.
We've all seen the Portrait Lighting Apple pioneered a few iPhones ago, but so far, no phone camera I've seen has let you steer that virtual lighting just by moving your finger on the screen. This is part of a redesigned Google Photos suite and camera viewfinder that also lets you combine Night Sight with portrait mode.

Though, well, as you can see, even on a Pixel, faking a bokeh and separating foreground from background is not that easy. I mean, just compare that struggling result with this shot. Taken in Night Mode, but without any fake portrait mode business on Samsung Galaxy Note20 Ultra.
You'll see why friend David Imel pointed out in his review that the primary Pixel camera hasn't changed much in five generations. I mean, if the Pixel 6 launches without some serious upgrades to the optics, Google's reputation for having the go-to still photography smartphone may well buckle.
For now the combination of fast viewfinder and consistent processing mean that in almost every situation I'm in, even if I only have a quick second to snap the shot, I can usually get a superior version of the photo I'm trying to take than I could with almost any other phone.
Taken together with the astrophotography mode that still blew me away as recently as my Pixel 4a review and these new video stabilization modes, well, they give me hope that when Google does update the Pixel camera hardware, the software will be ready to take full advantage of it.
The Pixel 5 costs a buck shy of $700, not counting carrier and retailer discounts. That's 100 bucks cheaper than the Pixel 4 launched at with double the storage capacity. And in terms of competition, its closest neighbors are the OnePlus 8T and Samsung Galaxy S20 Fan Edition,
both well-regarded. You can basically throw a rock and hit a great phone if you're shopping around 700 bucks, but for me, there's just something about the Pixel. Those little exclusives, like the custom Pixel Labs, the lack of any intrusive manufacturer's software, even the custom tap sounds make it feel a little more homey.
And keep in mind, you can spend $200 less to get the Pixel 4a 5G with most of the same features. Don't get me wrong. I can't wait to get back to my foldables and forgotten phones of yesteryear, but that's because I'm a tech reviewer with a specific focus, and also a weirdo.
If you're neither, the Google Pixel 5 is a great smartphone hiding beneath the disguise of a forgettable one. Into the Fold, When Phones Were Fun, and something new called Follow-up Friday, all those are series I teased in this video and all of them have new episodes coming up soon, so please subscribe to theMrMobile on YouTube so you don't miss 'em.
This review was made possible by a Pixel 5 review sample provided by Google, but Mr. Mobile works for you, not the manufacturers. Google didn't pay for this coverage nor did it receive copy approval or an early preview of this review.